You may have heard that in November 2021, inflation reached the highest rate in 30 years, but what does that mean, and how does it impact you? Let’s start with the basics.

Inflation is an economic phenomenon where the value of goods and services in an economy increases over time. Have you ever heard someone talking about how, back in the ’60s, you could get a Coke for a nickel? The reason why a soda now costs $2 is because of inflation—the relative value of money has gone down compared to the price of goods.

In general, there are two main types of inflation that economists care about. In this post, we’ll explain those two causes, explain factors that influence inflation, explore ways experts suggest we counteract inflation, and what you can do about it. But first, we’ll dive into the current causes of inflation and how they’re impacting your current buying power.

4 Main Causes of Inflation in Our Current Economy

In the last few months, you may have noticed that prices have been rising on everything from grocery items to gas, with consumer prices up 6.8% compared to this time last year. That’s the power of inflation. But what’s currently causing inflation and this undesirable strain on your wallet?

With respect to the current economy, there are a few causes of inflation:

1. Increase in the Money Supply:

An increase in the money supply is meant to help stimulate the economy by helping to put more money in the hands of consumers. While this might sound like a positive shift, it can actually have negative influences on the economy, like contributing to inflation.

The Federal Reserve has printed trillions of dollars over the last two years, which has contributed to the devaluation of U.S. currency and the high inflation rate we’re currently experiencing—and is being speculated to continue.

Not only that, but the money supply has increased faster than the rate of production, which contributes to shortages. And, with more money in circulation, consumers have more to spend—which in turn is spurring greater consumer demand.

However, with demand outpacing production, there are many shortages across the country.

Whether you’re in the grocery store or waiting for something to ship from overseas, you’ve likely been having a hard time getting ahold of certain goods in recent months. There are a few factors that are playing into this current issue.

First, during the height of the pandemic, many companies decreased output because consumers weren’t spending. However, they are now and companies have been trying to play catch up.

Pair that with the shortages in an all-around shortage of supplies to make certain goods, and it’s become a compounding issue.

And we haven’t even gotten to the traffic jams at the various ports throughout the country that have led to a massive amount of goods being stuck for long periods of time, sometimes months. With goods stuck at these ports and unable to be unloaded, it means that many shelves will continue to sit empty. 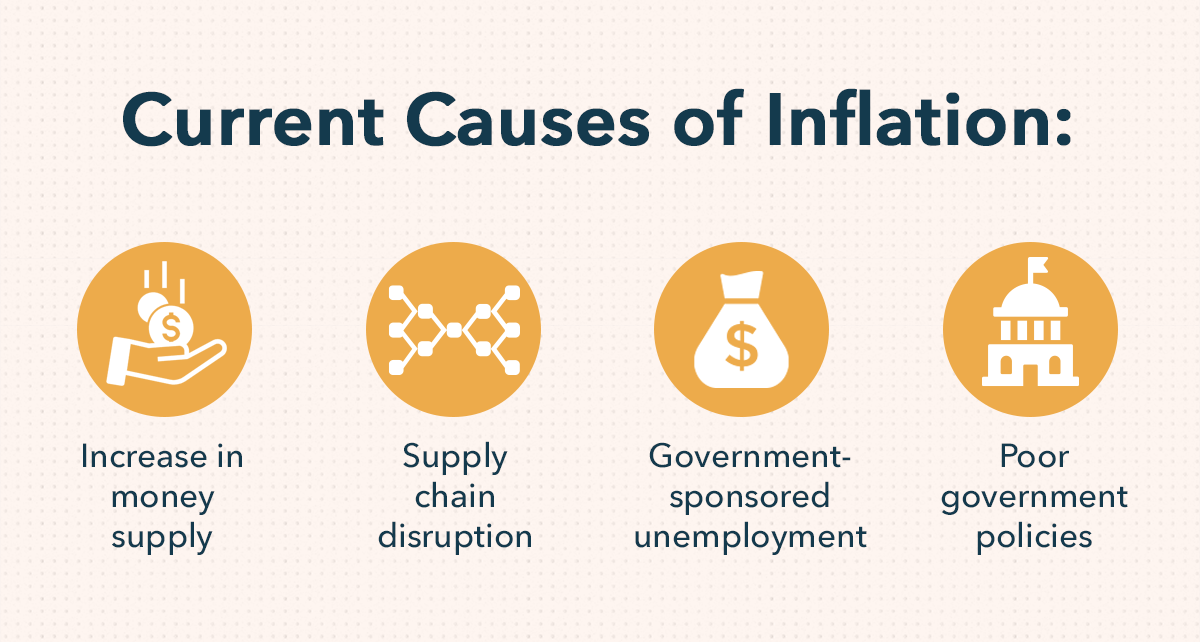 In response to the spike in job losses we saw in 2020, there were increases and expansions to existing unemployment programs both on the state and federal level. While this may have helped get many people back on their feet, with many people unwilling to go back to work for previous wages—combined with concerns over health and safety—we’re now seeing long-term impacts that are affecting the current inflation.

As such, businesses are having to pivot and restructure their approach to compensation and employment. While some businesses will be able to adapt to the demand for higher wages in order to ensure they have the staff they need to support their operations, many small businesses will not.

Bad government policies can impact inflation—most specific to our current circumstances are those regarding fossil fuels. If you have a car, you’ve likely seen gas prices rising over the last year.

While these policies need to be addressed, this isn’t a quick fix. U.S. oil production and refining have been down this year due to several causes including Hurricane Ida, which impacted oil supply. Pair that with oil-exporting countries not providing enough, and there are supply constraints on both sides of the equation.

With supply constraints and the current increase in demand for gasoline, prices don’t look to be coming back down in the near future.

Now that we have a better idea of what factors are contributing to inflation most recently, let’s take a look at inflation causes through a more generalized lens.

What Are the General Causes of Inflation?

It’s important to take the time to dive deeper into inflation as a whole so you can better understand how and why inflation occurs and how that plays into the economic impact consumers experience.

We’ll go into more detail below about the typical causes of cost-push and demand-pull inflation. For more about inflation, check out the definition of inflation and our free inflation calculator here. 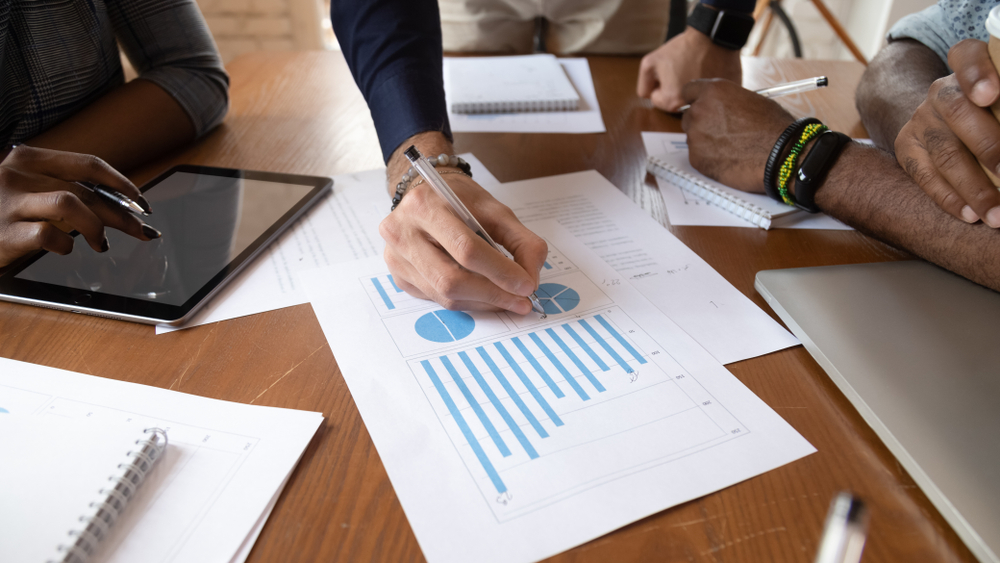 Cost-push inflation occurs whenever the supply end of the production chain experiences cost increases. That includes situations like:

In addition to these two broad types of inflation, there are also many factors that can influence inflation. We’ll go over those next.

Factors That Can Influence Inflation When policymakers and other experts are concerned about inflation, the following are some of the most common factors that they monitor:

If the cost of production increases, it’s likely that companies will also increase the cost of goods and services. As noted above, this is one of the causes of cost-push inflation.

When the prices of goods go up (whether because of cost-push or demand-pull inflation), this is a sign that general inflation across the economy may be looming.

If the demand for goods is increasing—for example, because there is low unemployment—it’s likely that the cost for goods will increase too, at least before production can catch up. That may spur some inflation.

The availability of skilled labor is another potential cause of inflation. If labor necessary to produce certain products is scarce, then it’s likely the cost of those products will increase.

New technologies often cause disruptions to sectors of the economy. Depending on the way this goes, it may increase demand for certain products, may increase supply, or may increase costs somewhere along the supply chain. All of these factors can affect inflation.

The amount of money currently in circulation can also have an effect on the state of inflation. When there is more money in the economy, it may make the relative value of a unit of currency (like $1) go down. This is why some economists believe that printing more money to pay for government spending could result in inflation.

Counteracting the Effects of Inflation

A little bit of inflation is normal in most economies, but rapid inflation can be detrimental to society, as people can no longer afford many of the goods and services that they rely on. This leads many economists and policy analysts to wonder what inflation’s causes are, and how its adverse effects can be stopped.

The ways that governments can counteract the effects of inflation vary depending on the type of inflation that’s occurring, and the factors that are causing it. Economists are also not in agreement about the best ways to approach inflation. It’s an area that still needs a lot more study.

That’s not particularly helpful when you’re facing high rates of inflation in the present moment. However, that doesn’t mean you’re a sitting duck completely at the mercy of the economy.

As an individual, there are steps you can take to ensure that your money isn’t being adversely affected by inflation:

According to the Joint Economic Committee, prices are increasing at a faster pace right now than they have in decades, which is increasing concerns over inflation. While there’s no real emergency, now’s as good a time as any to take proactive measures.

Plan for the Future with Mint

If you’re curious how your income, debts, investment tracking, and more are stacking up against inflation, there’s one way to keep track: Mint. The Mint app lets you plan for your future by aggregating all your different financial info into one convenient place. Sign up now and download the app for free today and get a bird’s eye view of your finances, so you can plan for whatever the future holds, inflation or not!